The Lithium-Sulfur Battery Market size is estimated at $502 Million in 2021 and is expected to reach $6.8 Billion by 2032, growing at a CAGR of 32% during the forecast period of 2022 to 2032.
The use of Electric vehicles is escalating as people become aware of CO2 emission, its influence on global warming, and the depletion of fossil fuels. Governments around the world are primarily driving the market for Lithium-Sulfur Batteries by their mounting inclination towards electrification in the transportation sector, coupled with their various initiatives for promoting the use of electric vehicles to curb carbon emissions. Lithium-Sulfur batteries are gaining popularity owing to their, high capacity, lightweight, rechargeability, and copious availability. The lithium-sulfur batteries are adopted across electrical, automotive, and manufacturing industries worldwide owing to these excellent characteristics.

“Lithium-sulfur battery holds 3 times more energy per kilogram as compared to other conventional lithium-ion batteries. These batteries use lithium metal as an anode and carbon-sulfur as a cathode that dissipates high energy density providing large energy storage ability. The North American region leads the global automotive lithium-sulfur battery market due to its advancement in the energy and power sector and high sales of Electronic Vehicles”. Lithium-sulfur nanotechnology-enabled batteries can deliver an energy density that is at least three times higher than traditional Li-ion batteries. Thus, the use of nanotechnology will further boost the lithium-sulfur battery market growth during the forecast period. 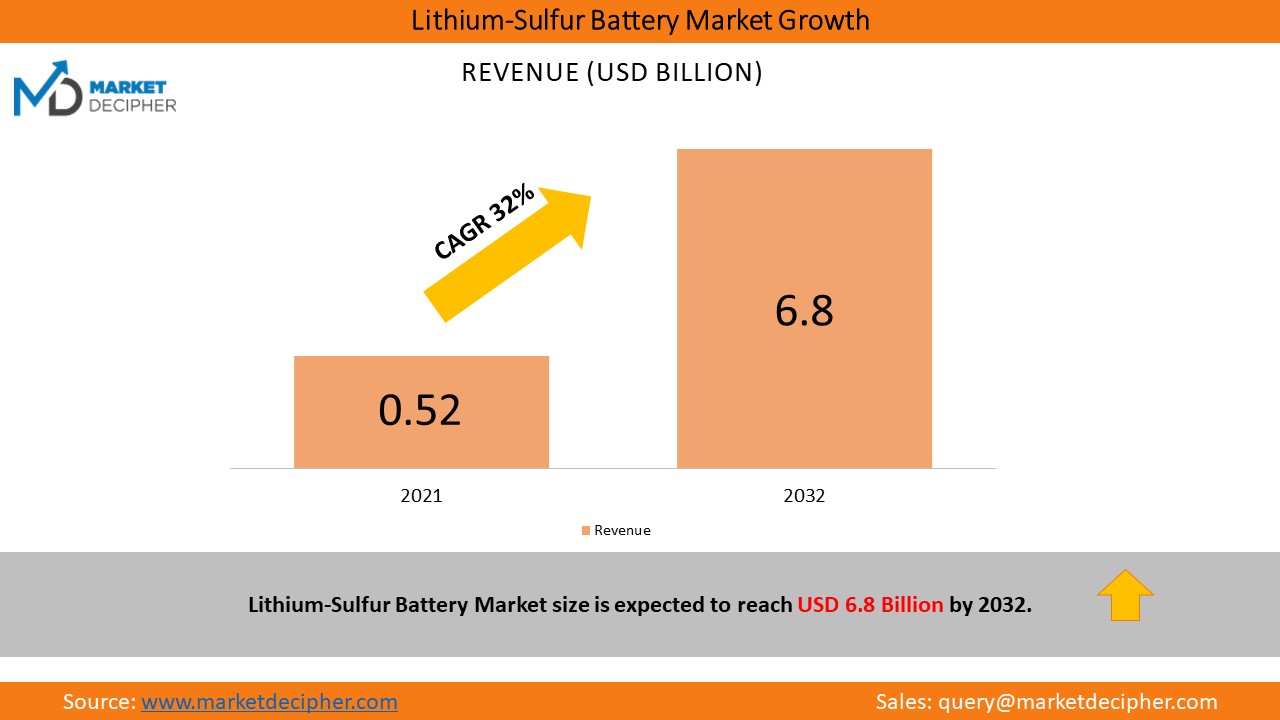 Driving Factors:
Sulfur is one of the most abundant elements on Earth and has an average price of $0.25 per Kg, which is very economical when compared to Lithium-Cobalt Oxide ($40 per Kg). AESBs based on Li-ion intercalation chemistry are responsible for around 50% of the cost of electric vehicles and have been stalling the electrification of road transportation. It is more cost-effective to recycle sulfur than the metal elements in conventional cathode materials because of sulfur’s easier solubilization and sublimation. Therefore, lithium-sulfur batteries are cheaper than lithium-ion batteries and can be used in a wide range of applications.
Significant investments by governments & private sectors in renewable energy after the removal of lockdown significantly boosted the demand for highly efficient automotive energy storage systems, such as lithium-sulfur batteries. The production of Lithium-ion batteries involves the use of toxic materials due to the lack of safer substitutes. The Government of China shut down most of its Lithium-ion battery manufacturing plants to curb lead poisoning. It requires a high quantity of lead, and a portion of this lead is often mixed with discharged fumes, which lead to health problems caused by air pollution. As a result, governments have enforced stringent regulations and standards for battery disposal and production. Improper dumping of batteries in landfills can lead to the seeping of sulfuric and lead into groundwater. This contaminates the drinking water supply and leads to lead poisoning. With increasing awareness about using environmentally friendly products among people, the use of lithium-sulfur batteries is more likely to increase dramatically across several producers worldwide. Many batteries, car manufacturers & research institutes are taking up initiatives and investing huge amounts of money in the R&D of lithium-sulfur batteries to make them commercially available.

Aviation Sector Exhibiting Fastest Growth
The demand for Lithium-sulfur batteries is propelling in the aviation industry as they are ultra-light in weight and aim to double the range of electric airplanes. The use of batteries in electric aerospace propulsion is also burgeoning, aiming to make vertical take-off and landing (VTOL) a reality for electric passenger aircraft.
The relatively high energy density, longer cycle life, lower cost, and safer alternative to Lithium-ion are driving the demand for Lithium-sulfur batteries in electric aviation. Moreover, the escalating application of drones is likely to strongly contribute to the overall market growth.

Asia-Pacific is the second largest market for lithium-sulfur batteries and is projected to show the fastest growth due to growing demand from the aviation industry and increasing awareness about renewable energy devices in this region. China holds the majority of the market share in the Asia-Pacific Region. China saw the highest sales of Electronic Vehicles in 2021 owing to its growing adoption of renewable energy and a boost by the government through investment in electric vehicles and subsidies provided to companies who sell these vehicles. According to India Brand Equity Foundation; the Aviation industry is the fastest growing and is the third largest industry in India. Around 450 aircraft are manufactured yearly in India. Therefore, the rise in the aviation industry leads to a dominant residence for lithium-sulfur batteries in this region.
Latin America, the Middle East, and Africa are also holding a significant share of the global market due to the increase in awareness of renewable energy and upcoming projects which will promote the use of these efficient batteries in Electric Vehicles. 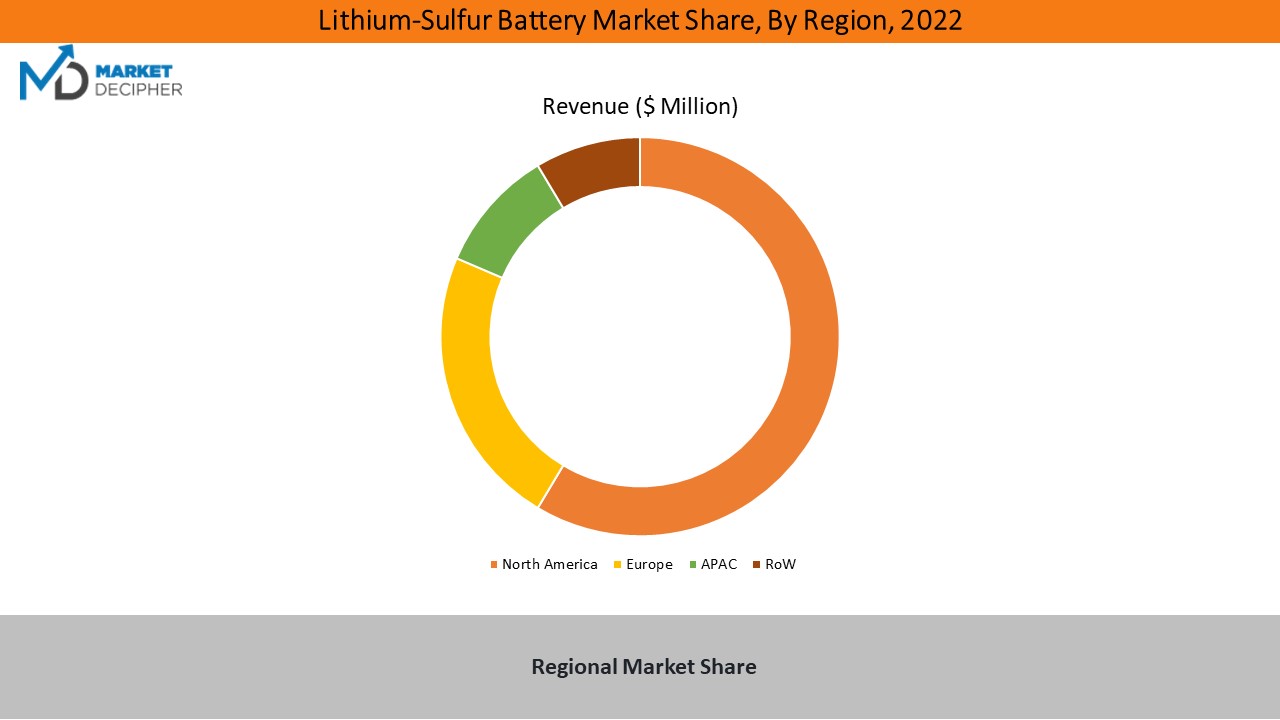 • Customization can be done in the existing research scope to cater to your specific requirements without any extra charges* (terms and conditions apply)
• Send us a query to get the Table of Contents and Research Scope along with the research scope and proposal.